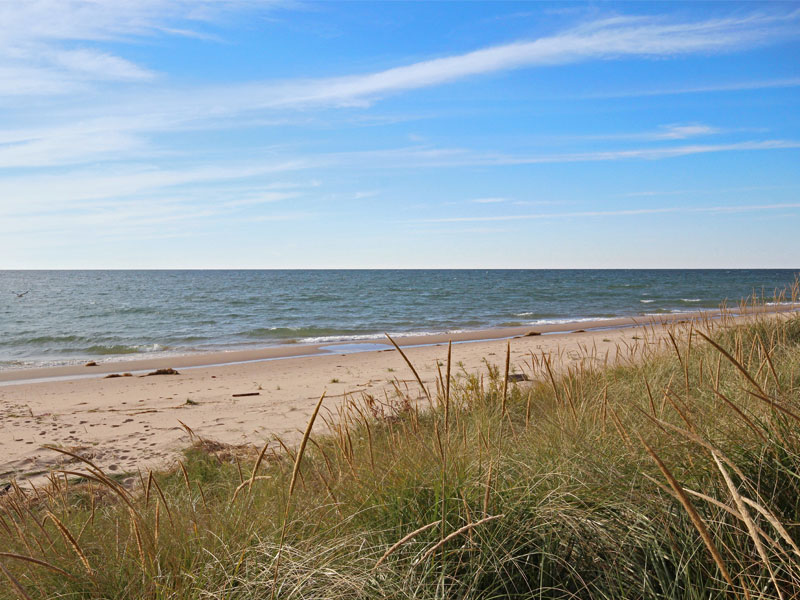 Lake Michigan Waterfront Real Estate represents some of the finest homes and properties in the world.

Carved by glaciers almost a million years ago, the Great Lakes were filled with the melting water of the monsterous ice formations. Lake Michigan was discovered in the 1600’s by French trader Samuel de Champlain and has been a large part of the mid-western section of the United States ever since then. It was named the “Lake of the Stinking Water” or “Lake of the Puants” after the Native Americans who resided in the area. In 1679 the Lake was named Lac des Illinois and a few years later was renamed Lake Michigan which it has remained. The state of Michigan was named after the lake to its west side, the name being derived from the Indian words “Michi gama” meaning “large lake” which it is. The lake covers an area equal to the combined states of Maryland, Massachusetts and Delaware!   Lake Michigan is approximately 118 miles wide and 307 miles long with just less than 1,180 cubic miles of water. Today the Lake Michigan provides fresh drinking water for over 10 million people. Lake Michigan is the world’s sixth largest freshwater lake and the second biggest lake in the United States, and the only great lake to lie completely in the country (the other lakes share shoreline with Canada). 22,178 square miles of water is lined by more than 1,600 miles of beautiful shoreline. The beaches lining the coast of the lake, especially in Northern Indiana and Michigan are often referred to as the “third coast” of the United States, after the Atlantic and Pacific Oceans.   Surrounding Lake Michigan is over 1,600 miles of shoreline that is covered in either rich, dense forests or beautiful off-white sand, known as singing sand for the squeaking noise it makes when stepped on (caused by the high quartz content). Lining the shore are the worlds largest freshwater dunes which provide a scenic landscape as well as a fun tourist attraction. Dune buggy rides are very popular with all ages, as is hiking, off-road driving, sand surfing, or just taking a tour and relaxing. All throughout the southern part of the lake, swimming, surfing, snorkeling, water skiing and tubing are exciting water sports that people of all ages can enjoy. Sail boats, motor boats and jet skis are also incredibly common on the surf. Fishing for trout, salmon, perch, and a variety of other fish is another favorite activity. Located in Holland is the infamous ‘Big Red’ lighthouse shining from the southern pier. Both sides of the channel between Lake Macatawa and Lake Michigan offer cement piers that are accessible to the public to walk on and enjoy the sights or sunset. What’s My Home Worth?

Fill out the form below and I will get to you.